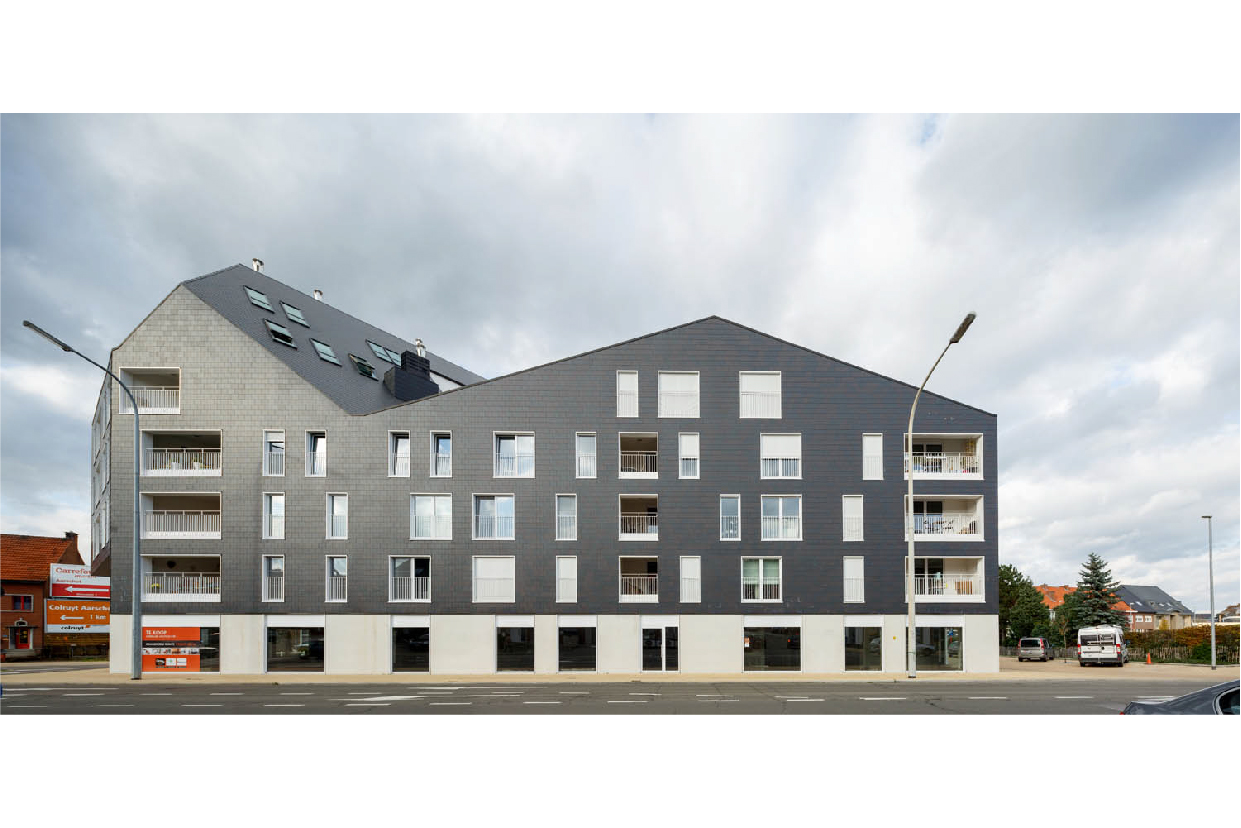 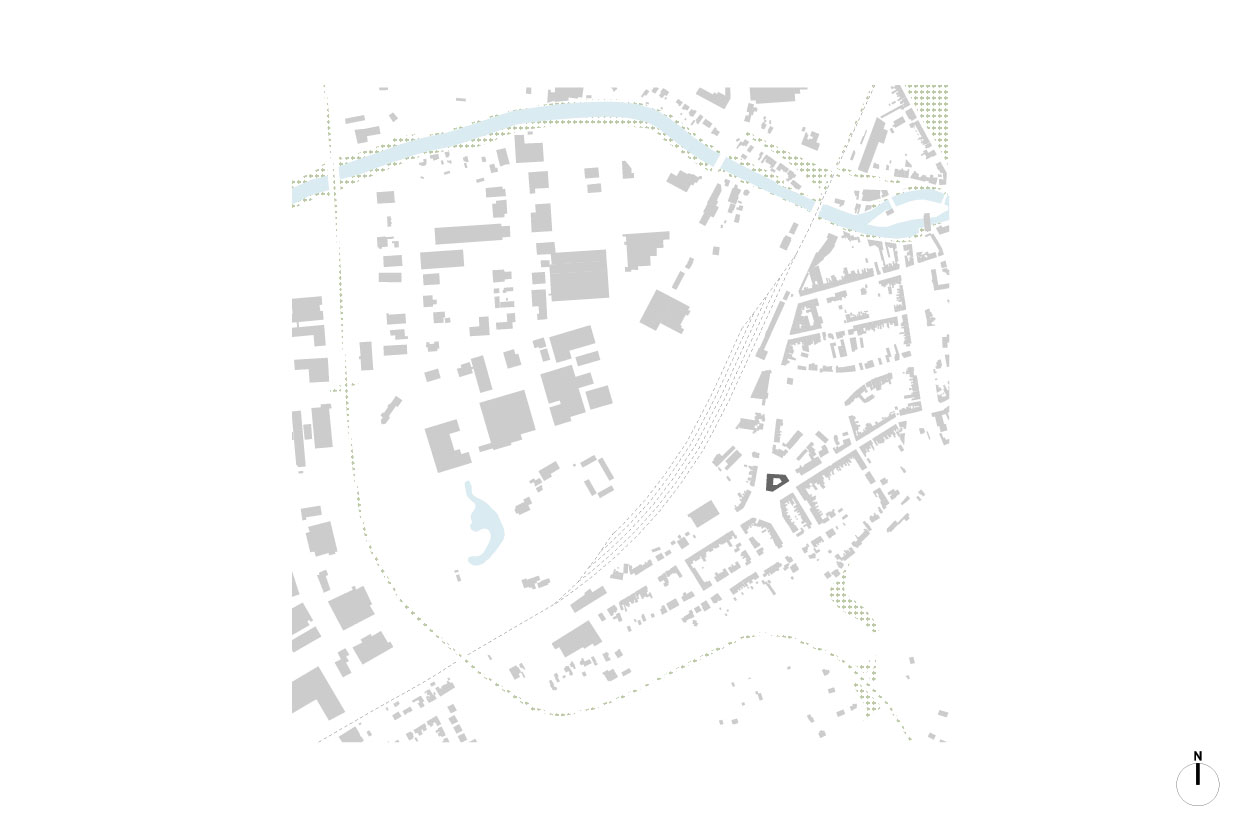 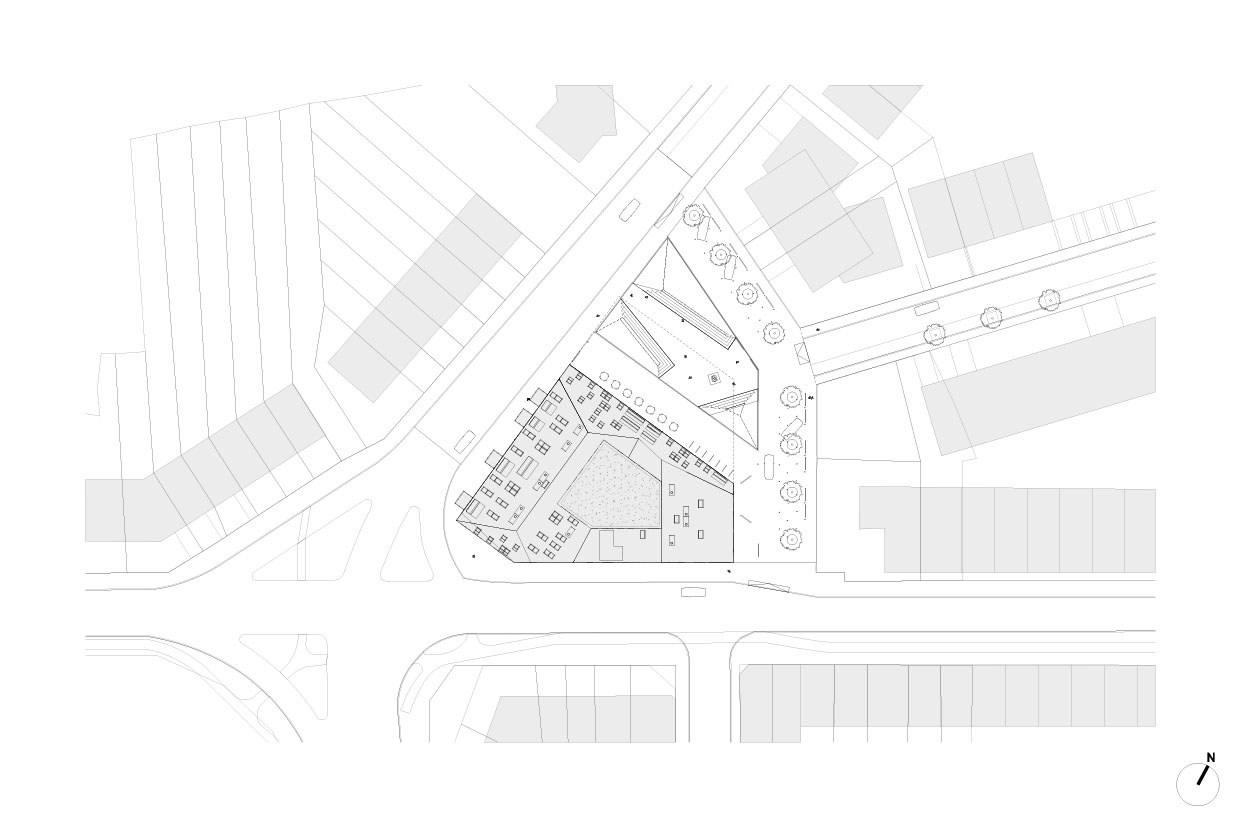 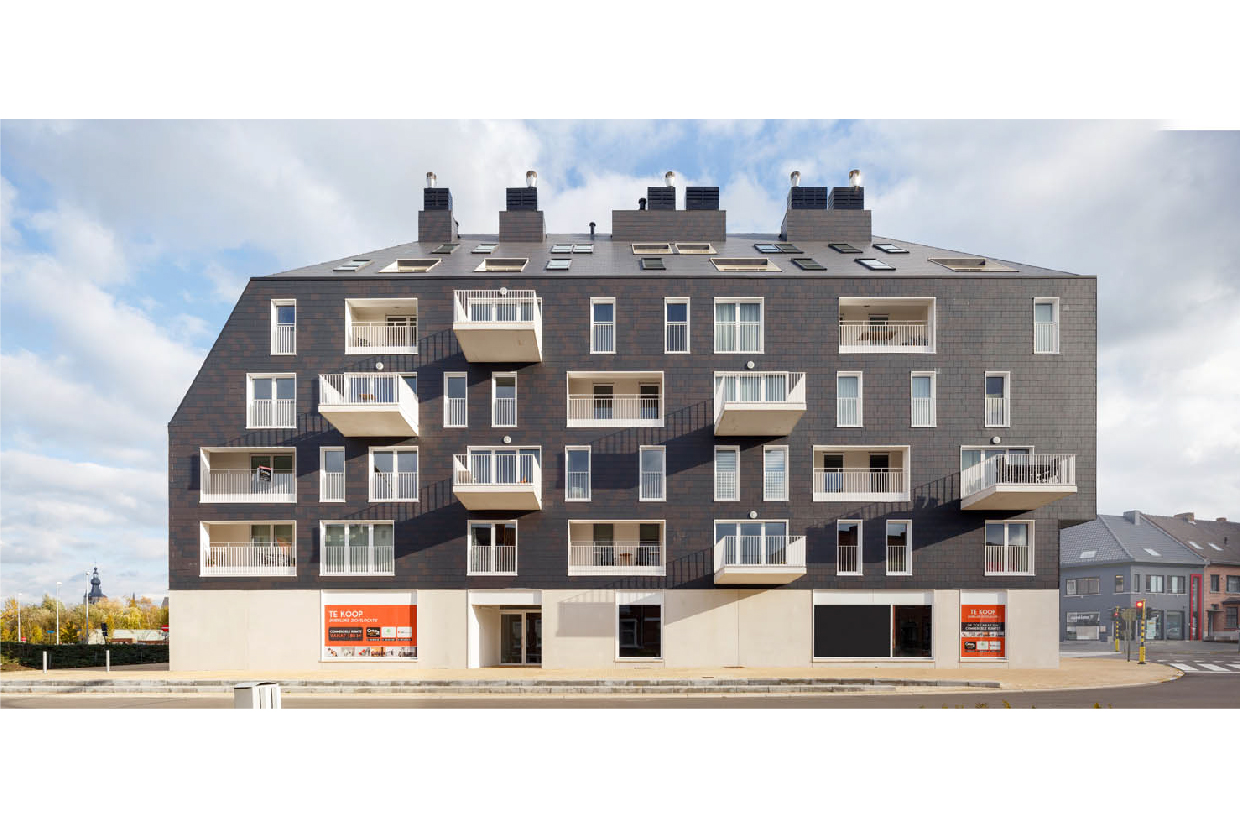 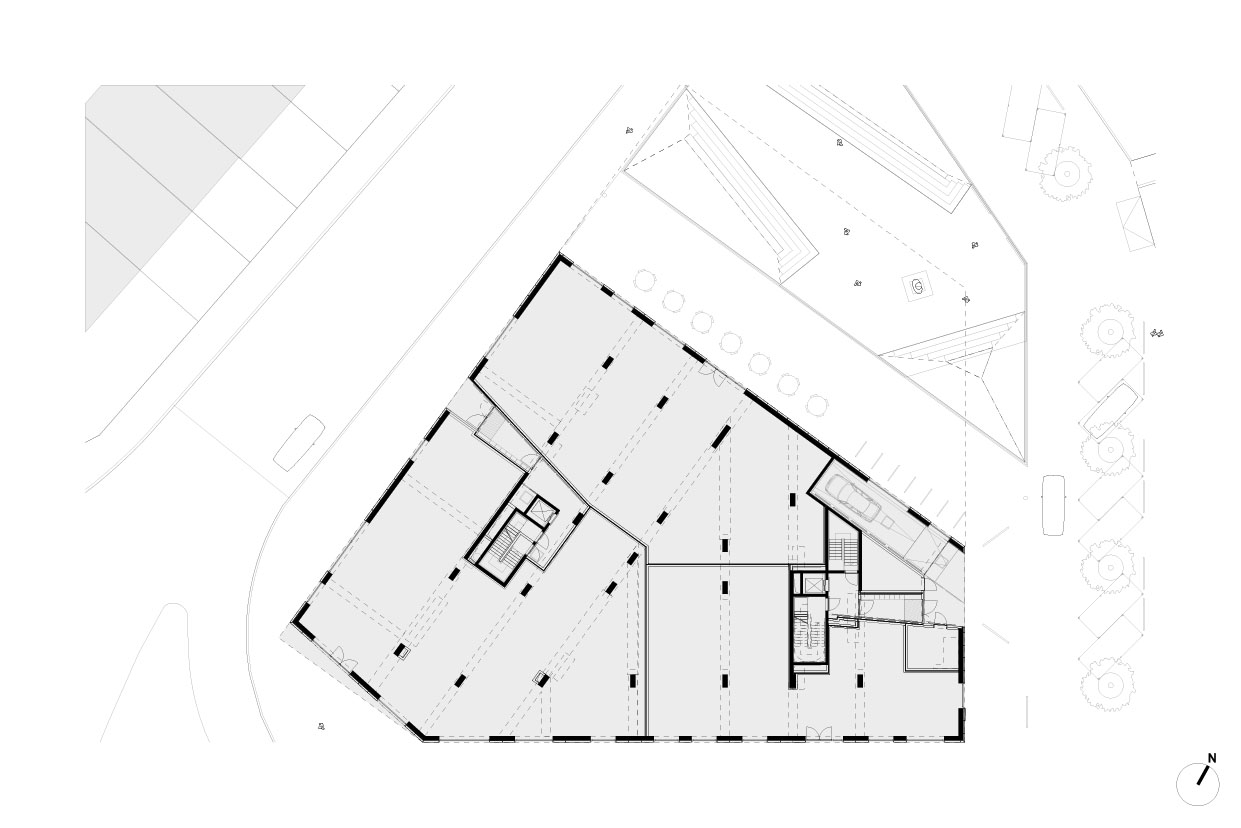 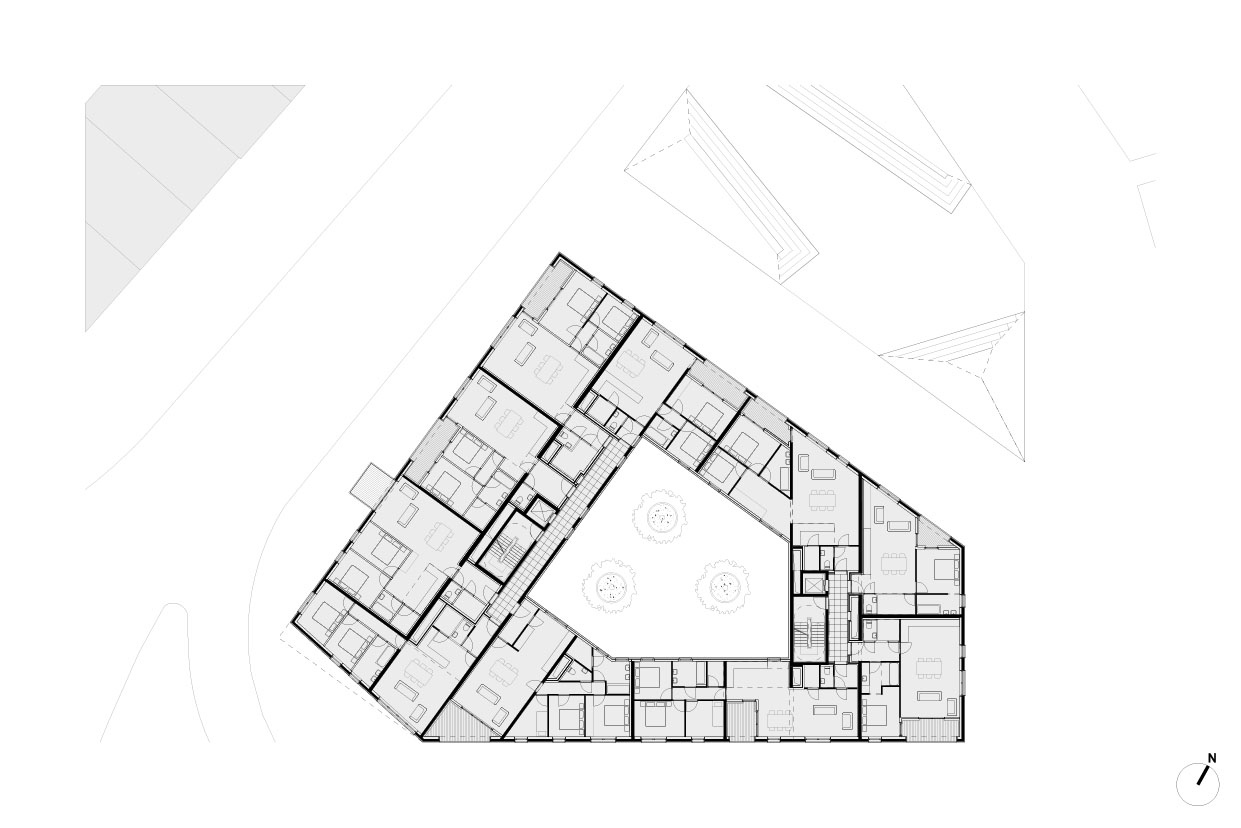 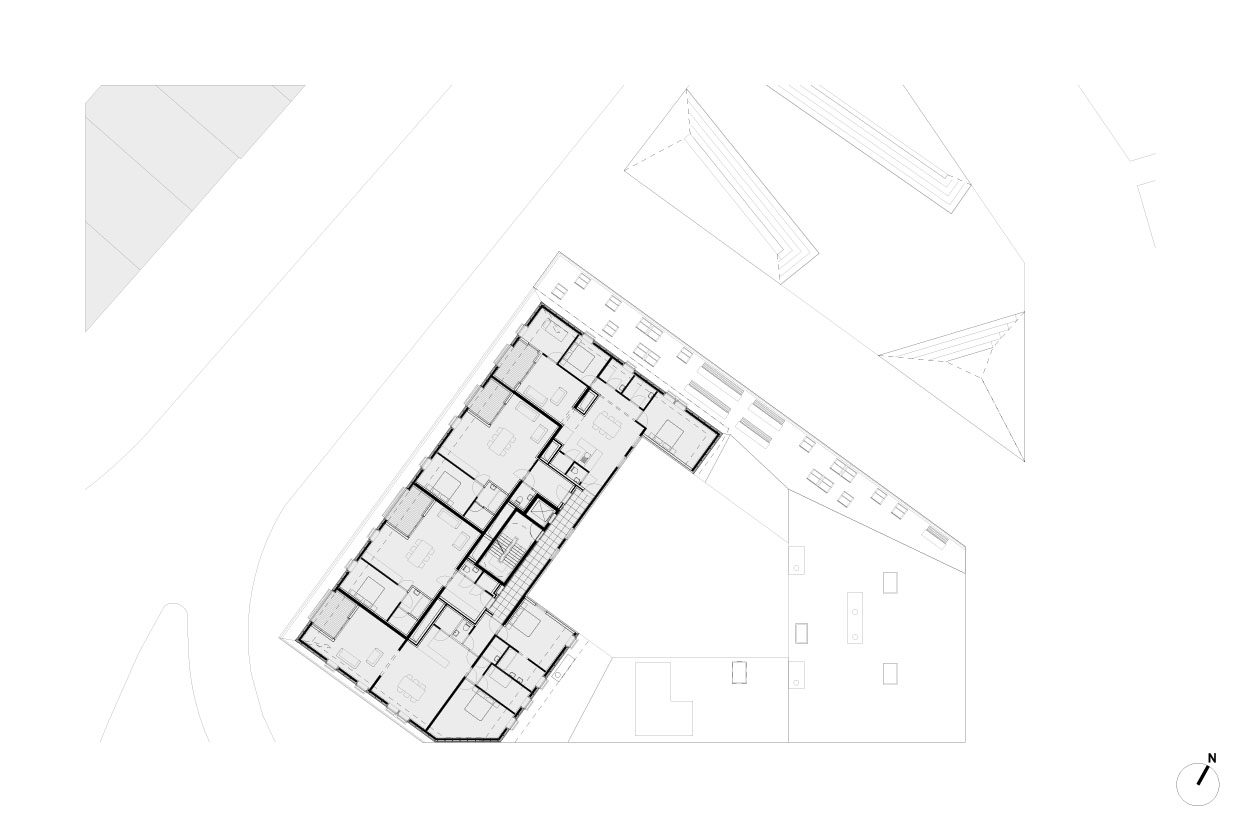 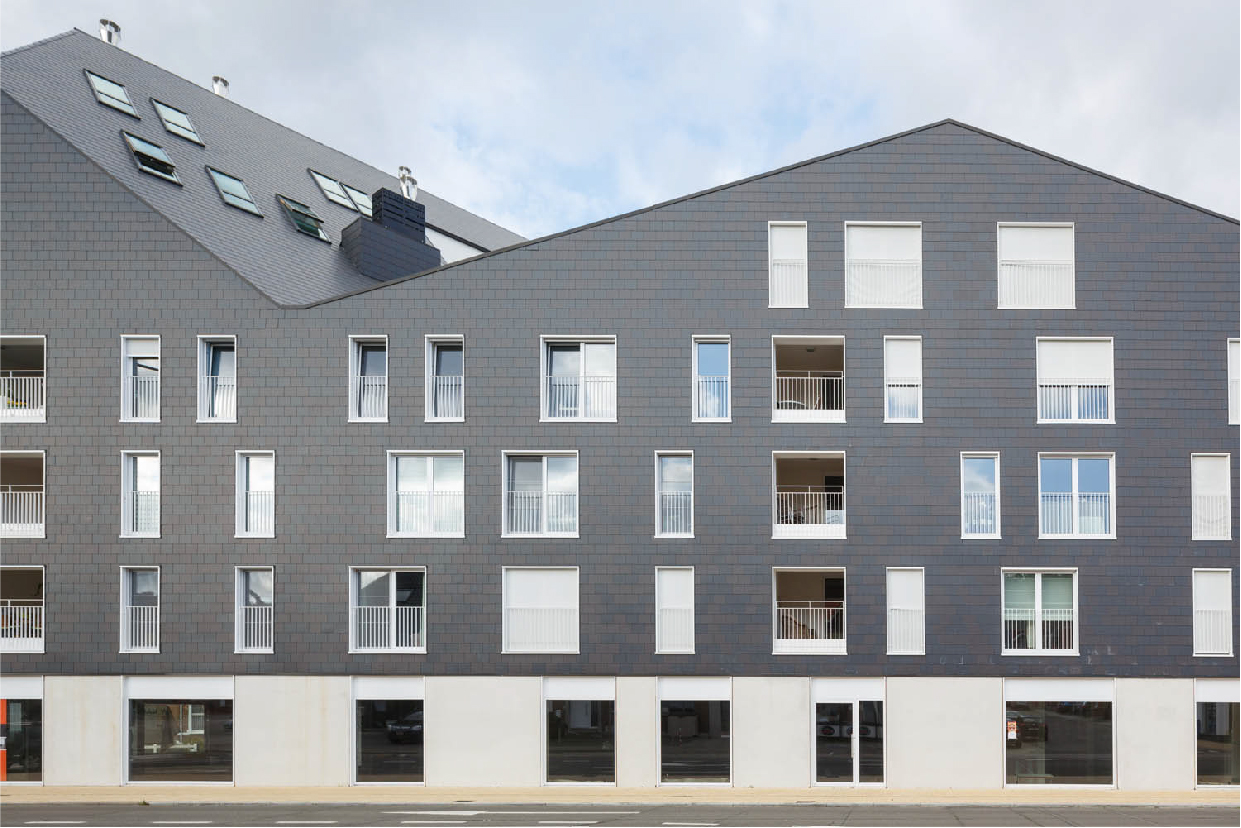 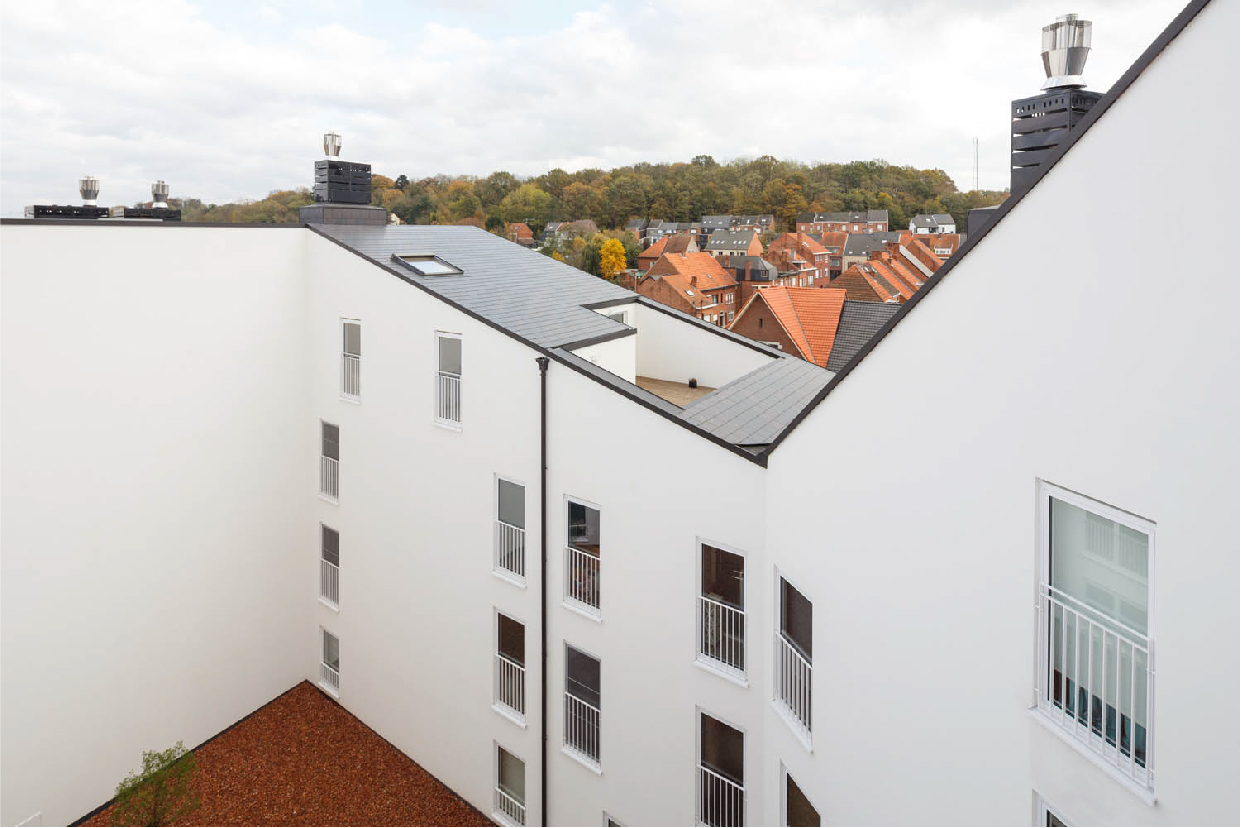 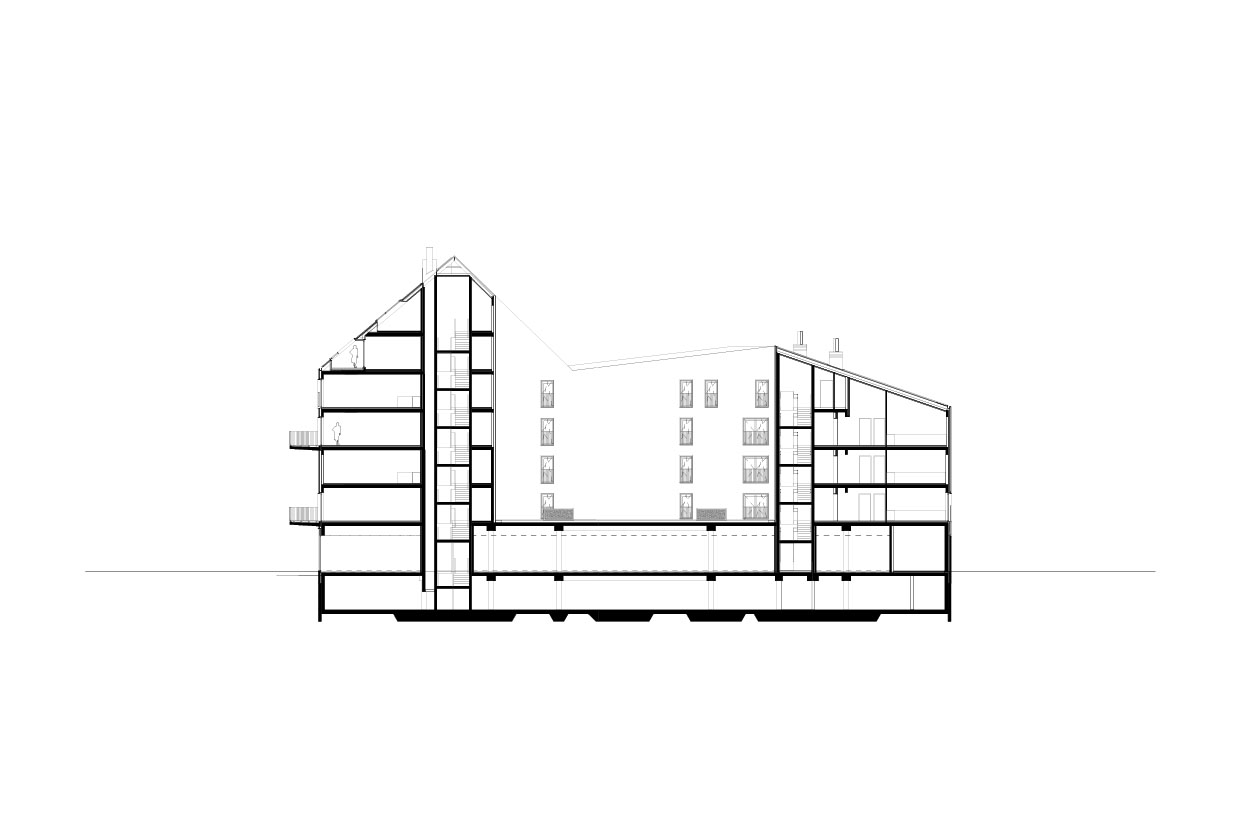 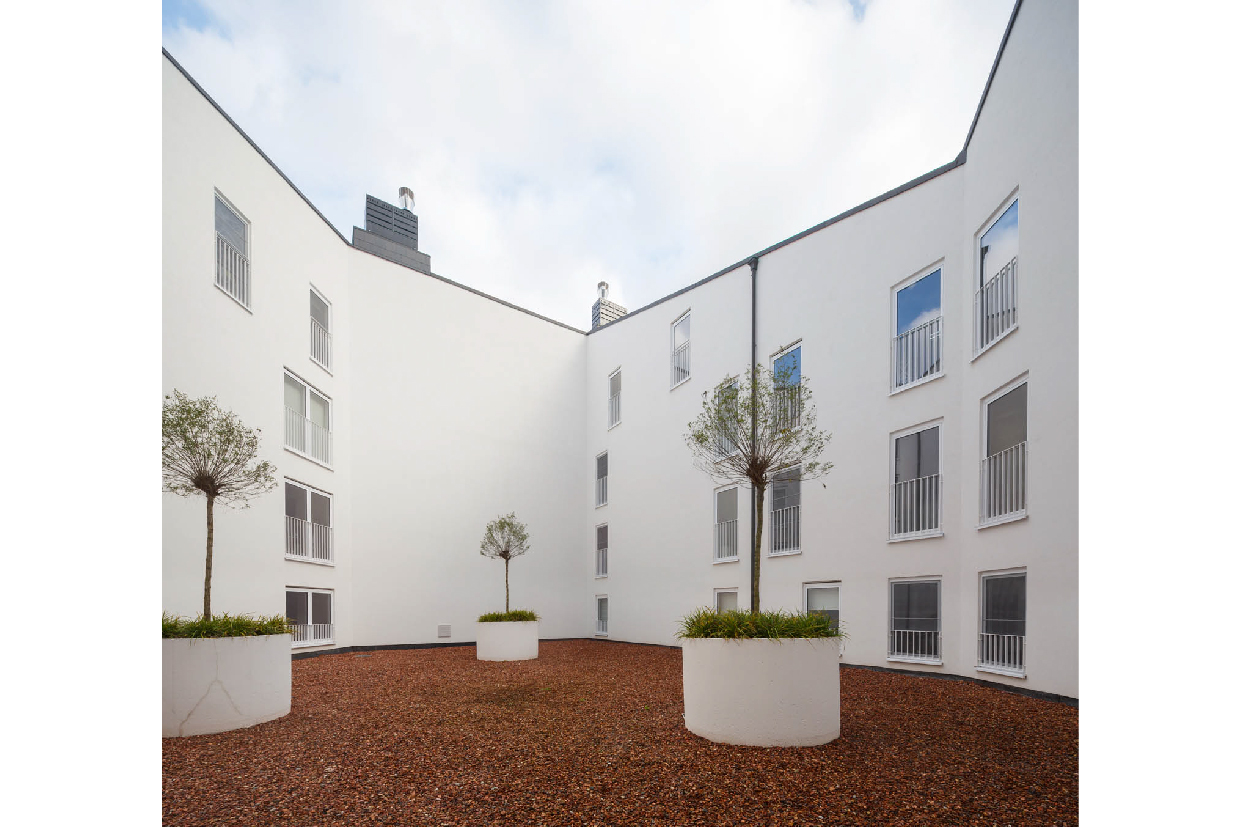 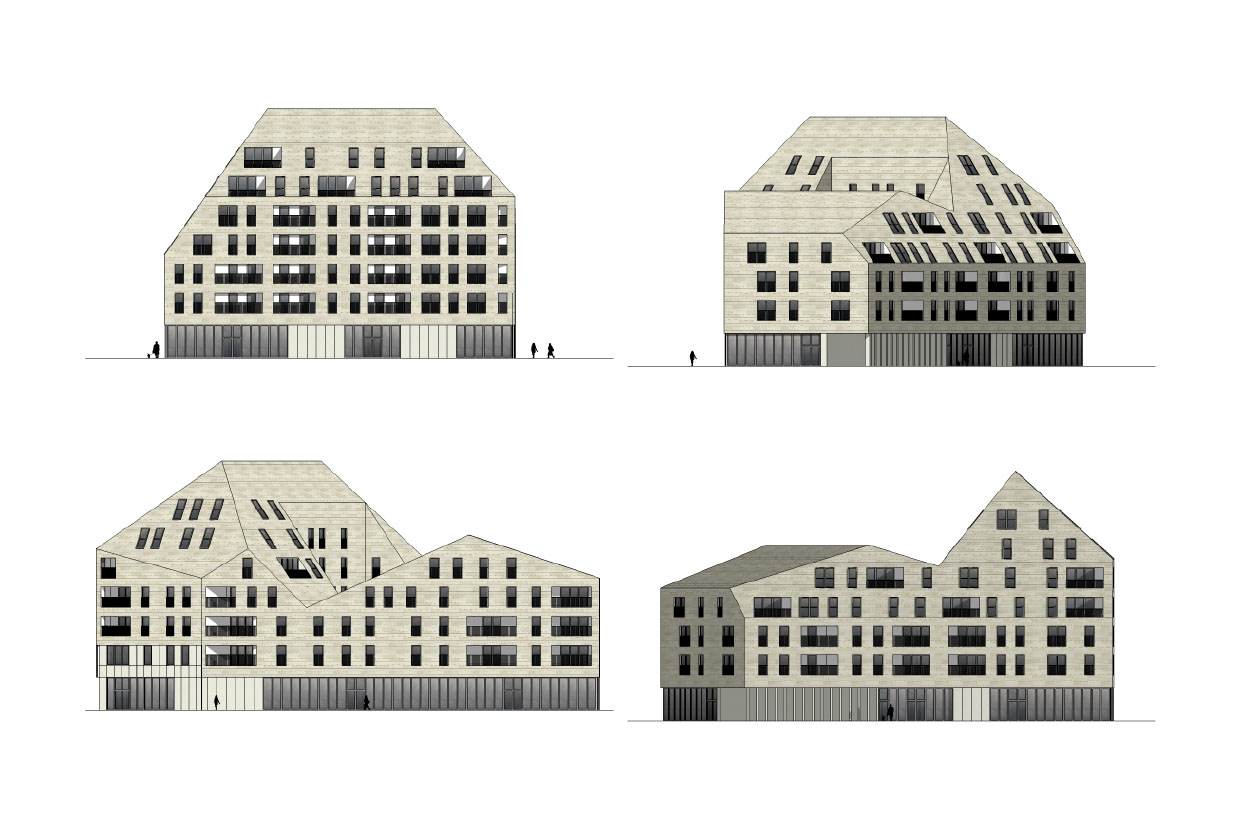 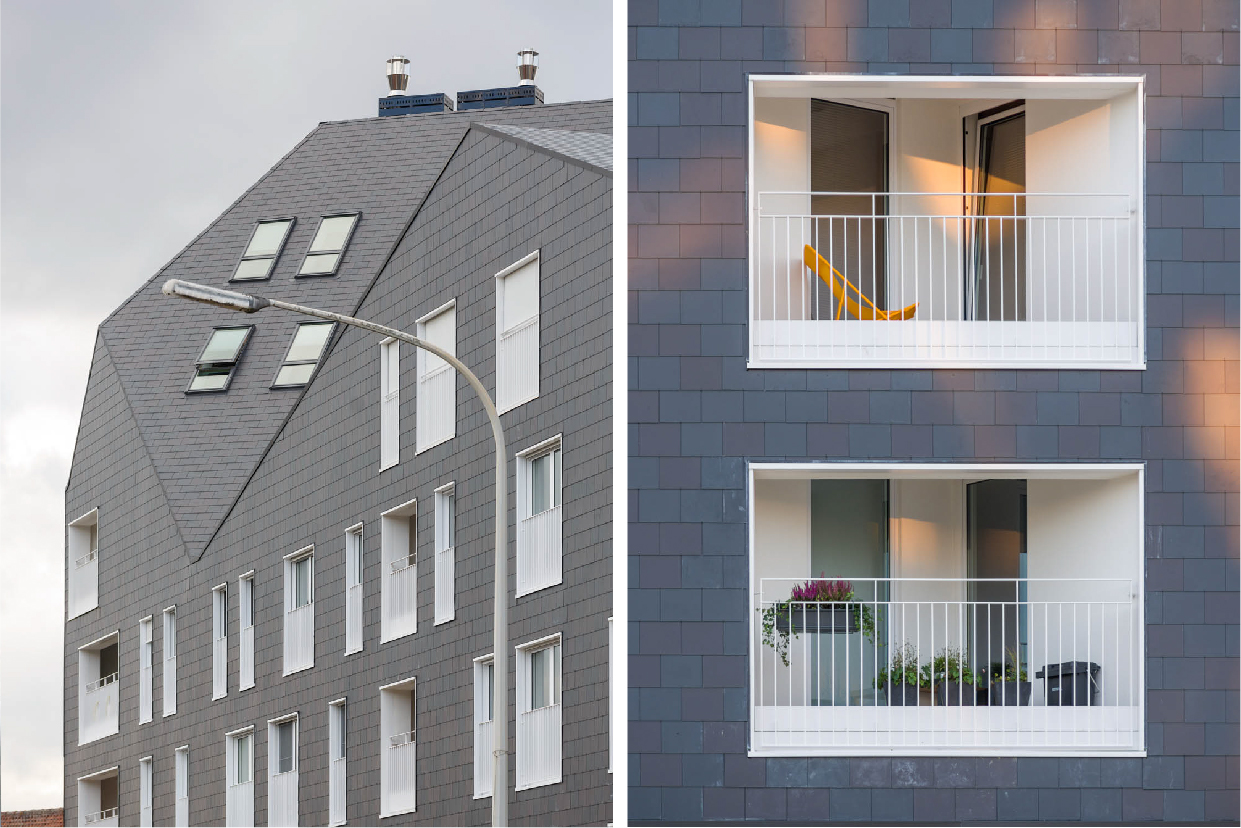 The Kapitein Gilson residential project forms part of an urban renewal project around Aarschot train station. The residential building and new square form a gateway alongside the south-western access routes to the city centre. The project comprises 44 apartments, 3 commercial units, underground garage and a new square.
The position and morphology of the building allow it to mark the intersection of the access roads Leuvensesteenweg and Steenweg Op Sint-Joris Winge, creating a number of new spaces at the same time. On the south-eastern side, the building completes the street profile of Leuvensesteenweg while the northern façade gives definition to the new square. Due to its largest mass and height at the intersection, the building’s most striking face points in this direction.
The commercial units in the plinth animate the public space, while the entrance spaces for residents are located in the more understated facades. The kernel of the square is traffic-free, creating a genuine common space, protected by three green hills. At the edge of the square, there is limited residential traffic and parking facilities. The upper floors of the building are earmarked for residential use and comprise a wide variety of apartments. The thickness of the building allows space for a large patio. This white, quiet space with trees offers extra light and views for the apartments and common hallways.
In terms of morphology, the building presents very diverse façade views despite retaining a significant sense of unity. The different facades render the building, on the other hand, a high degree of sculpturality. The use of materials and the window pattern underline this sculptural aspect. The raw shell of slate runs through from façade to roof. The irregular window pattern also fits well within the continuity of the sculpture. The skirting is articulated with light, concrete panels which offer the necessary robustness for public use. At the intersection, this plinth reaches double height.
With its sculptural form, the building is an emphatic response to the specific topography of the landscape. On the first plan, the building looks out on the other buildings in the immediate vicinity. Next, upon the green hills which flank the dale and finally, the high roof volume and apartments command views over the rural dale to the southwest.