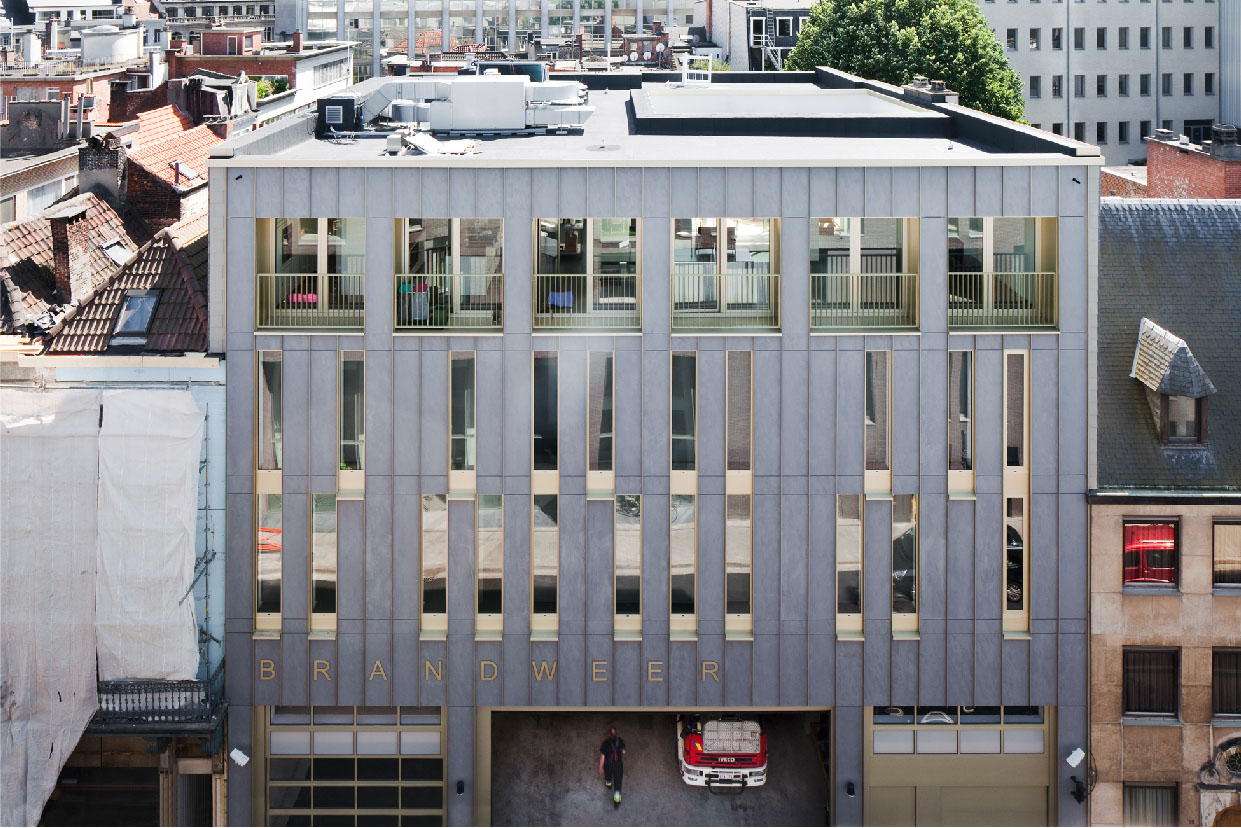 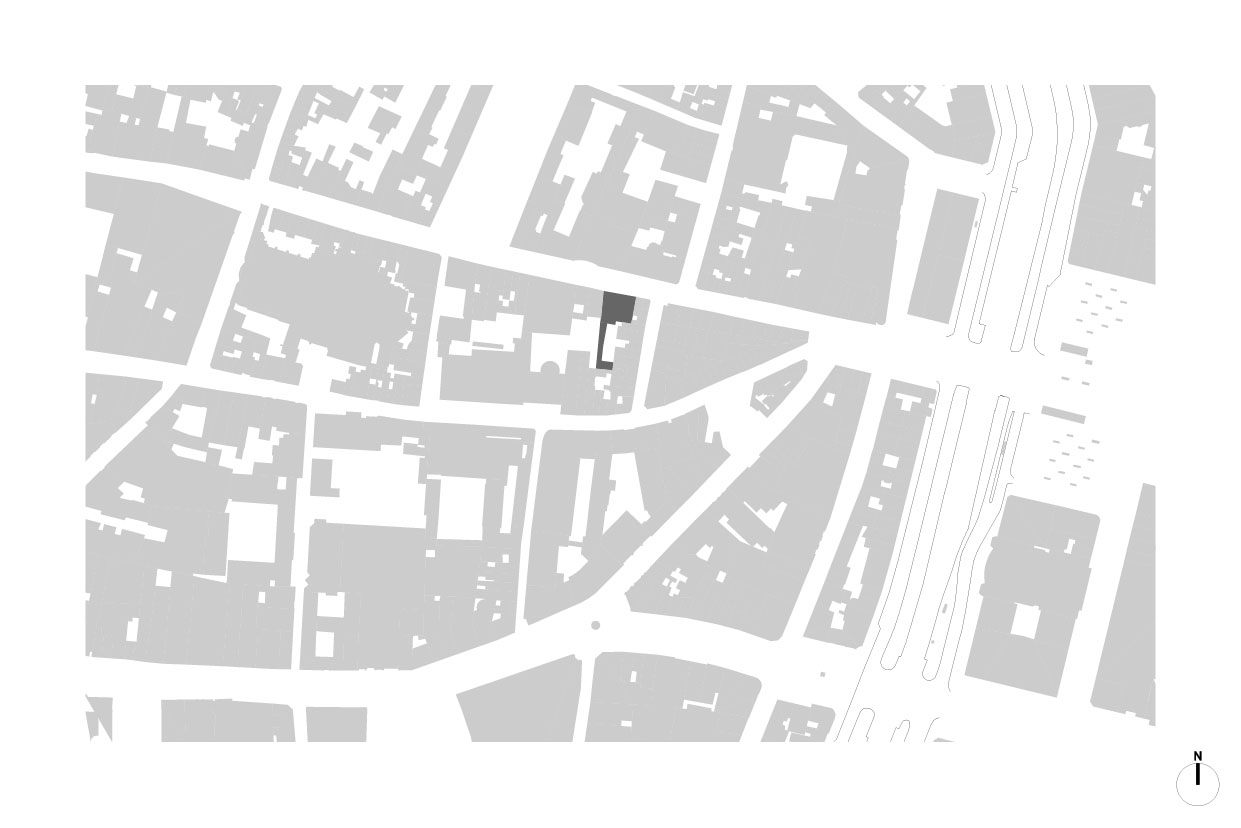 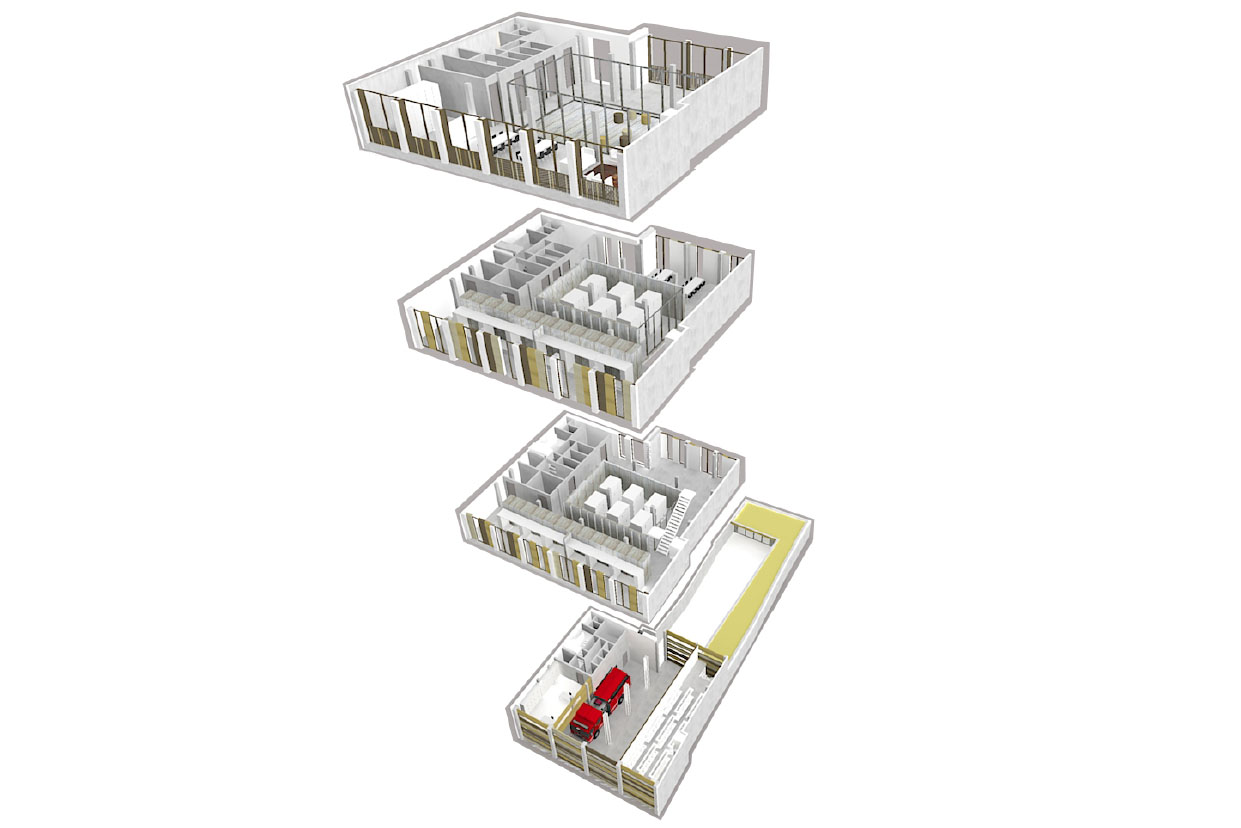 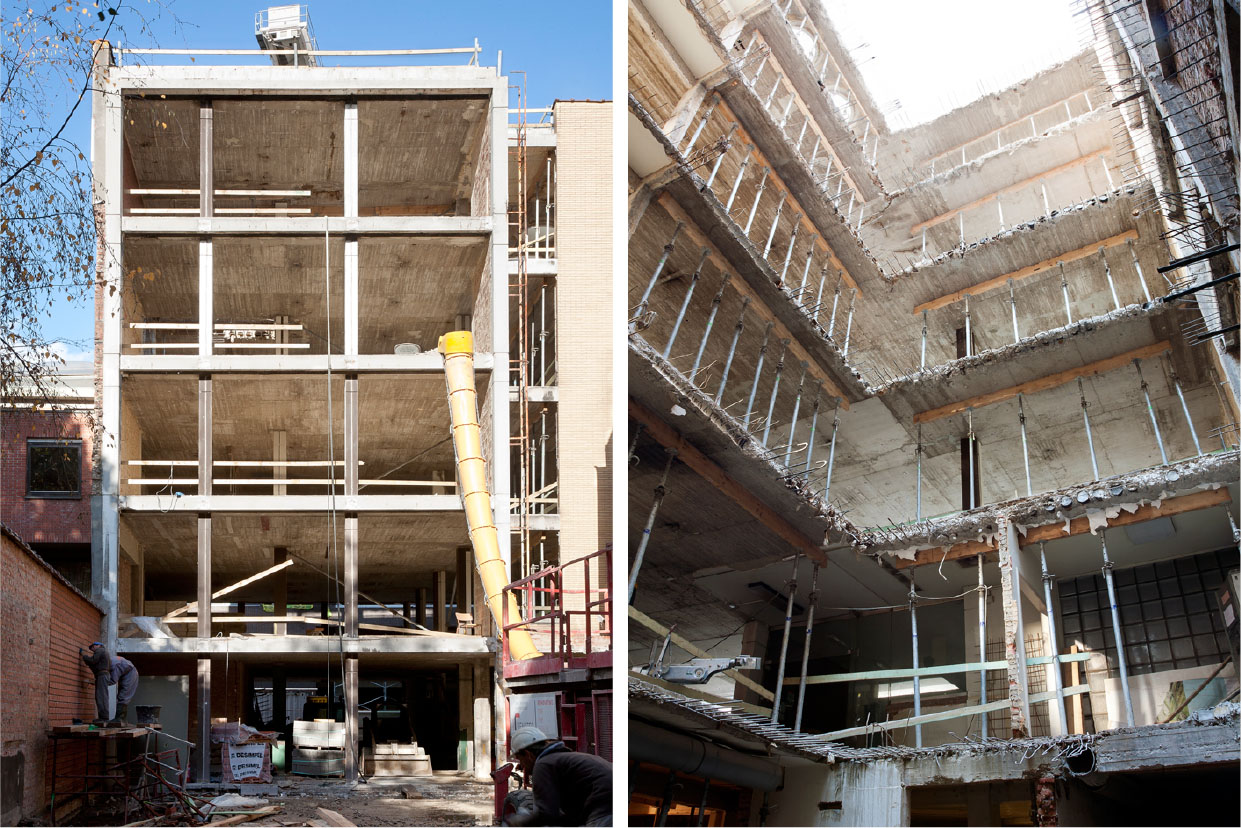 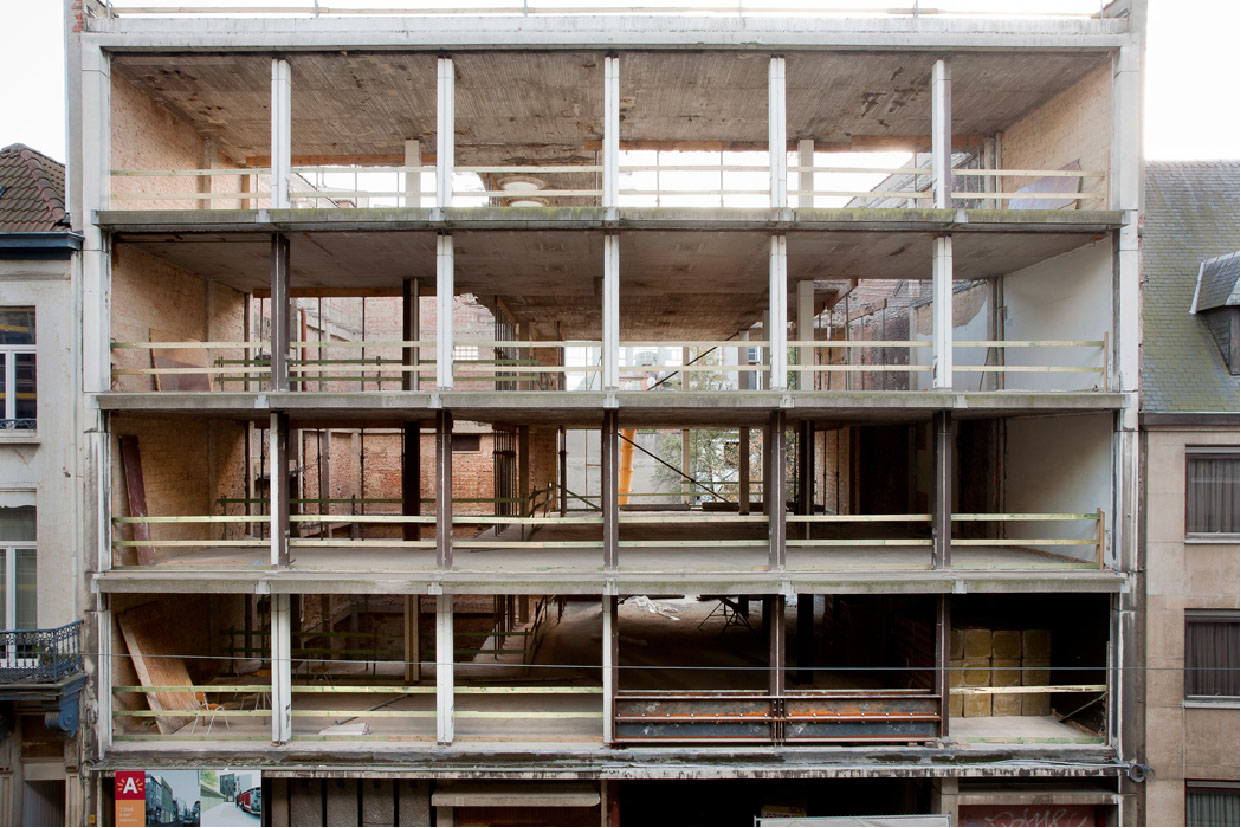 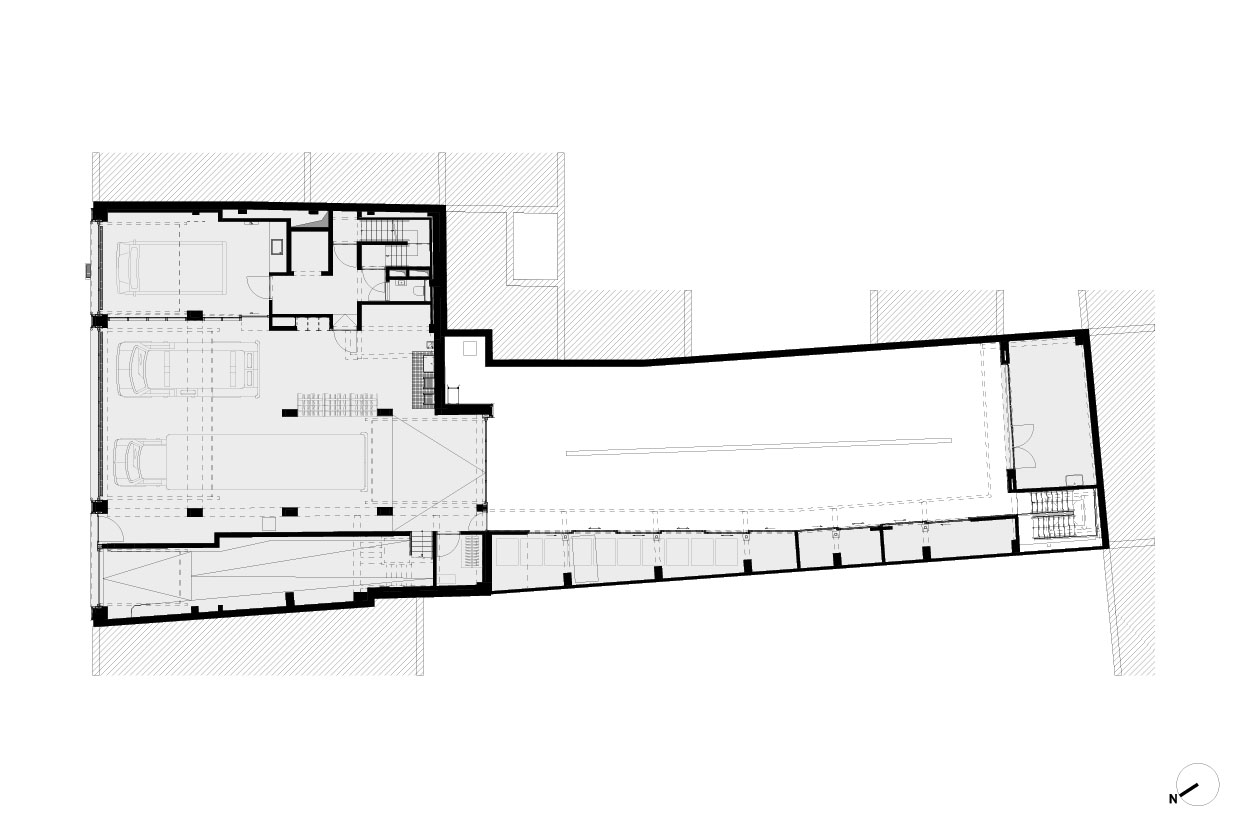 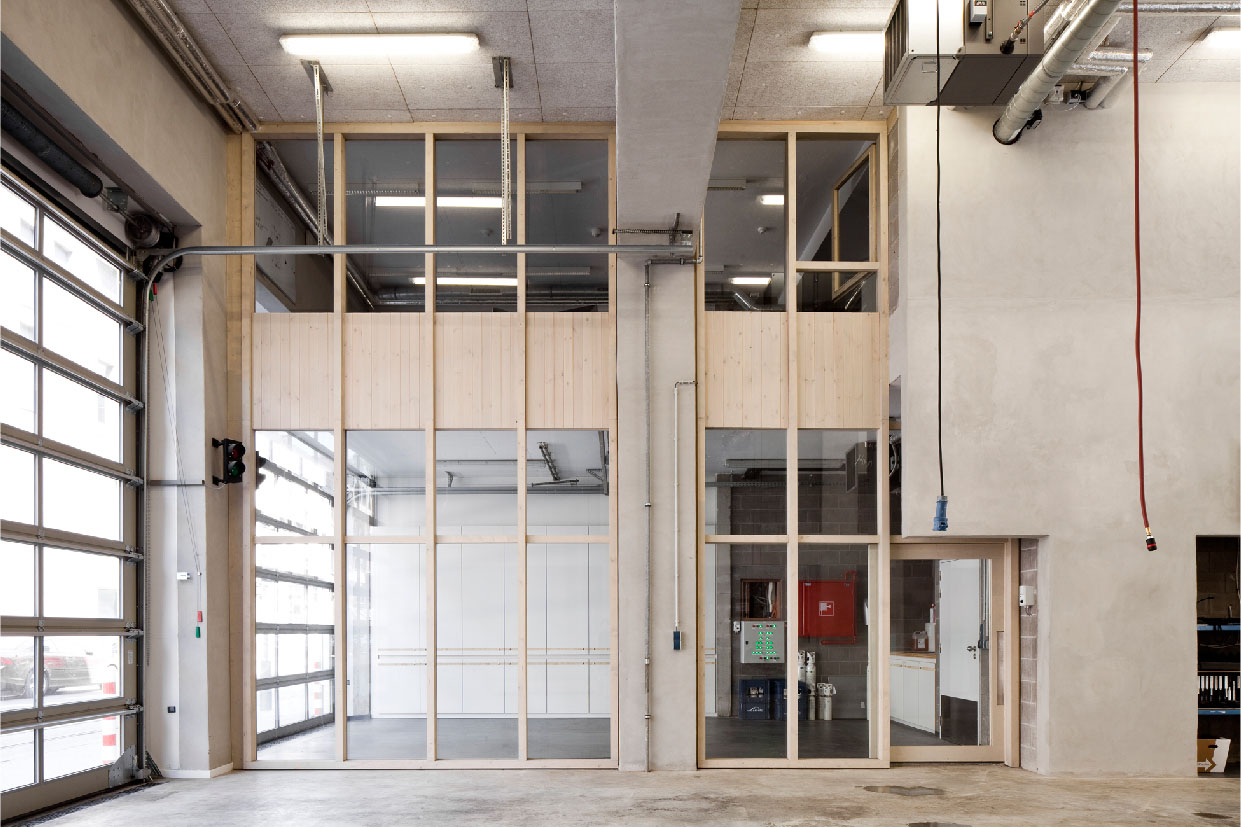 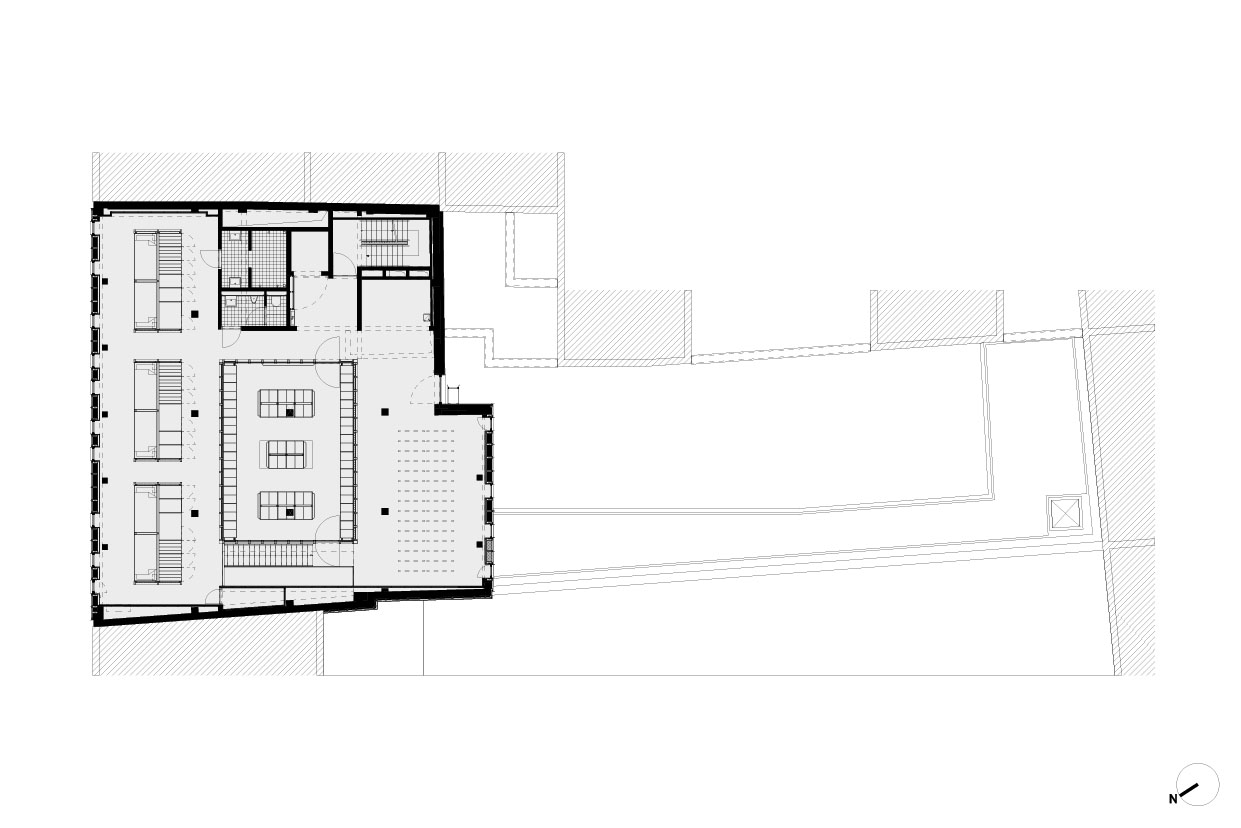 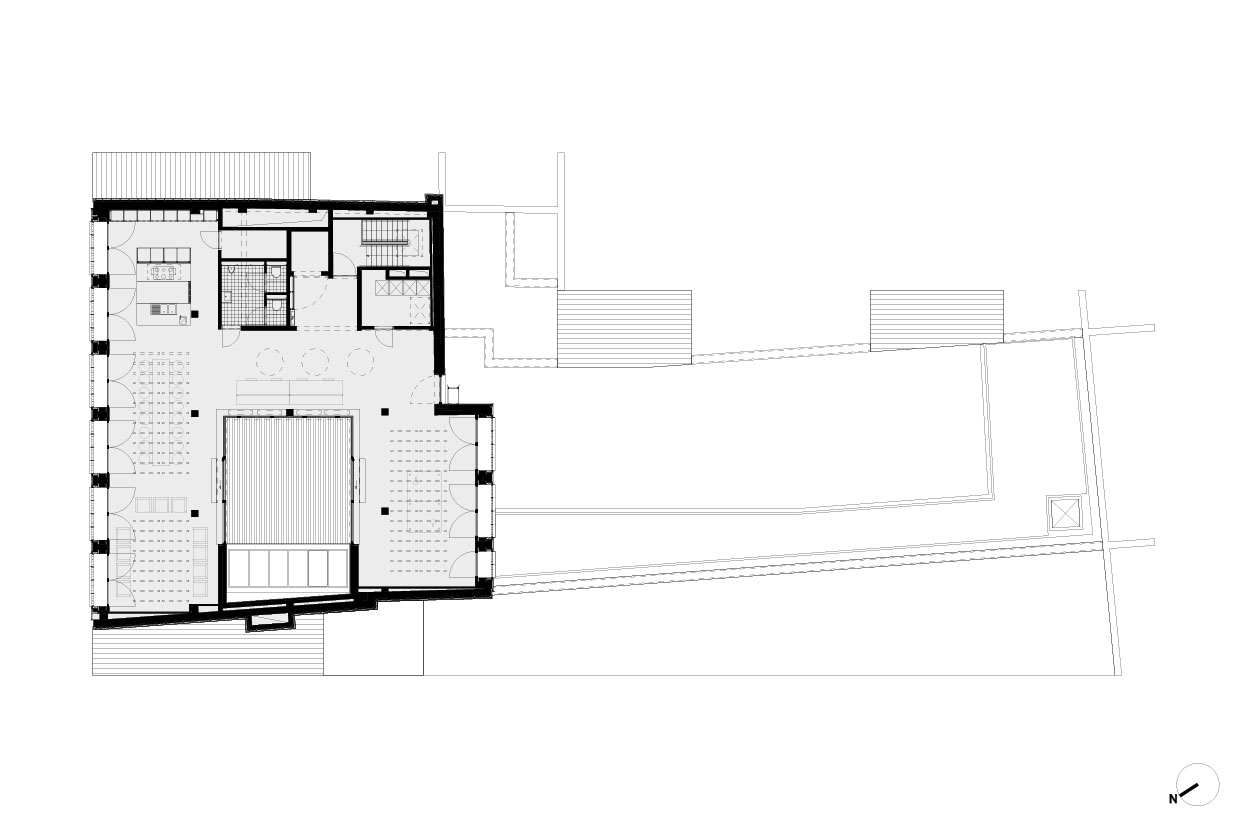 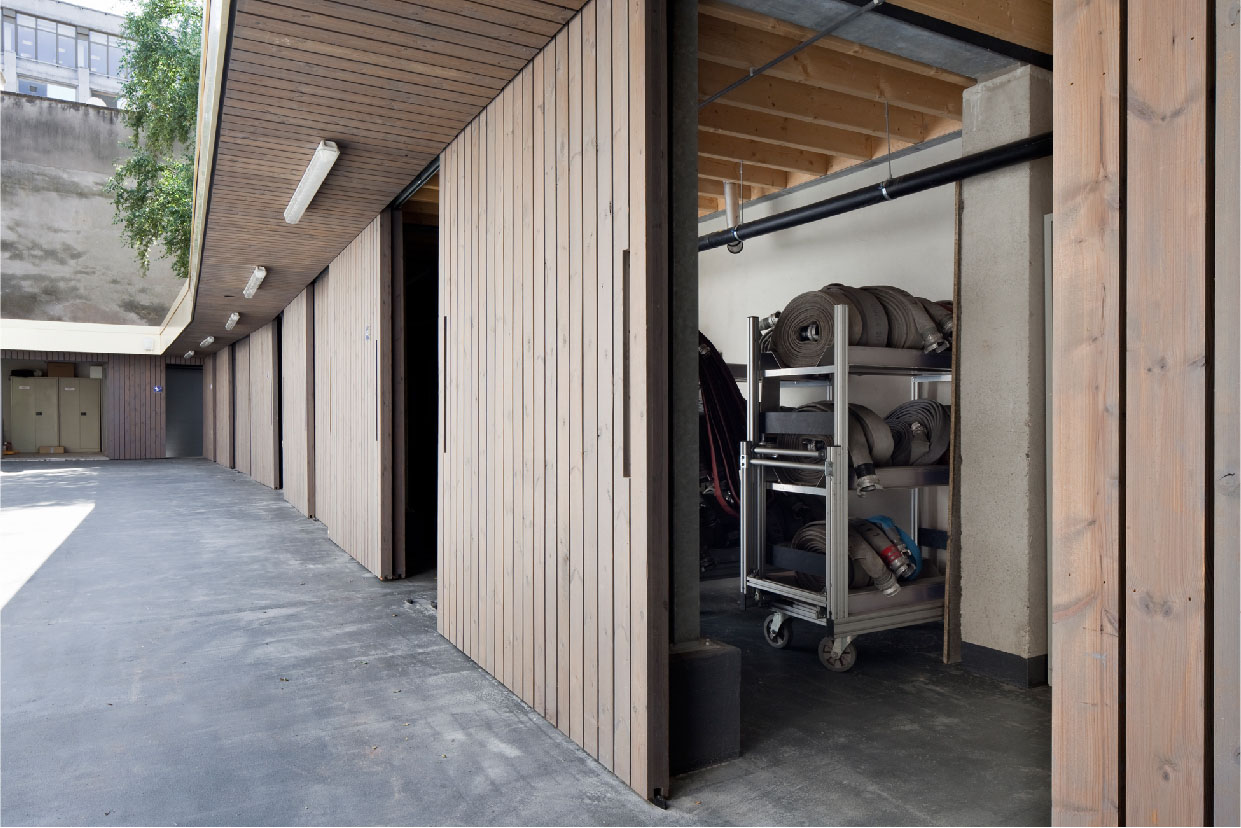 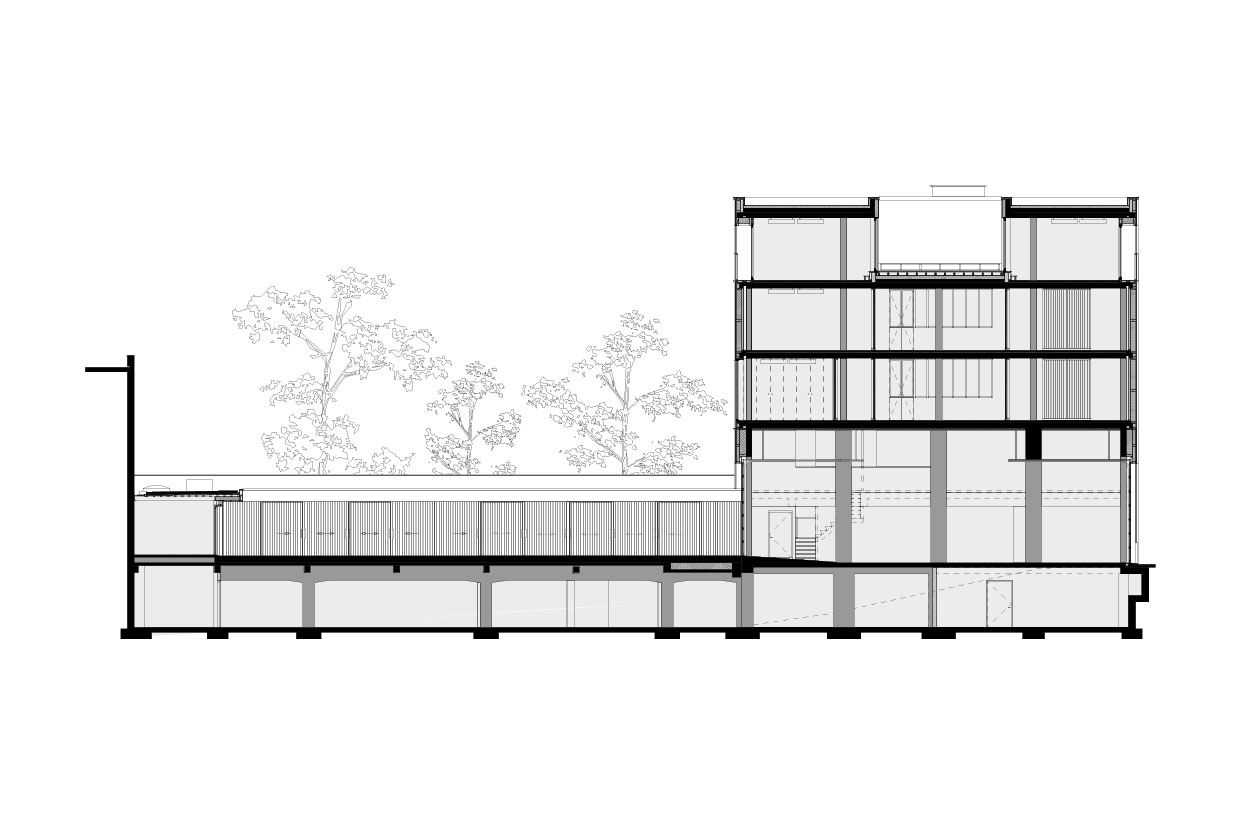 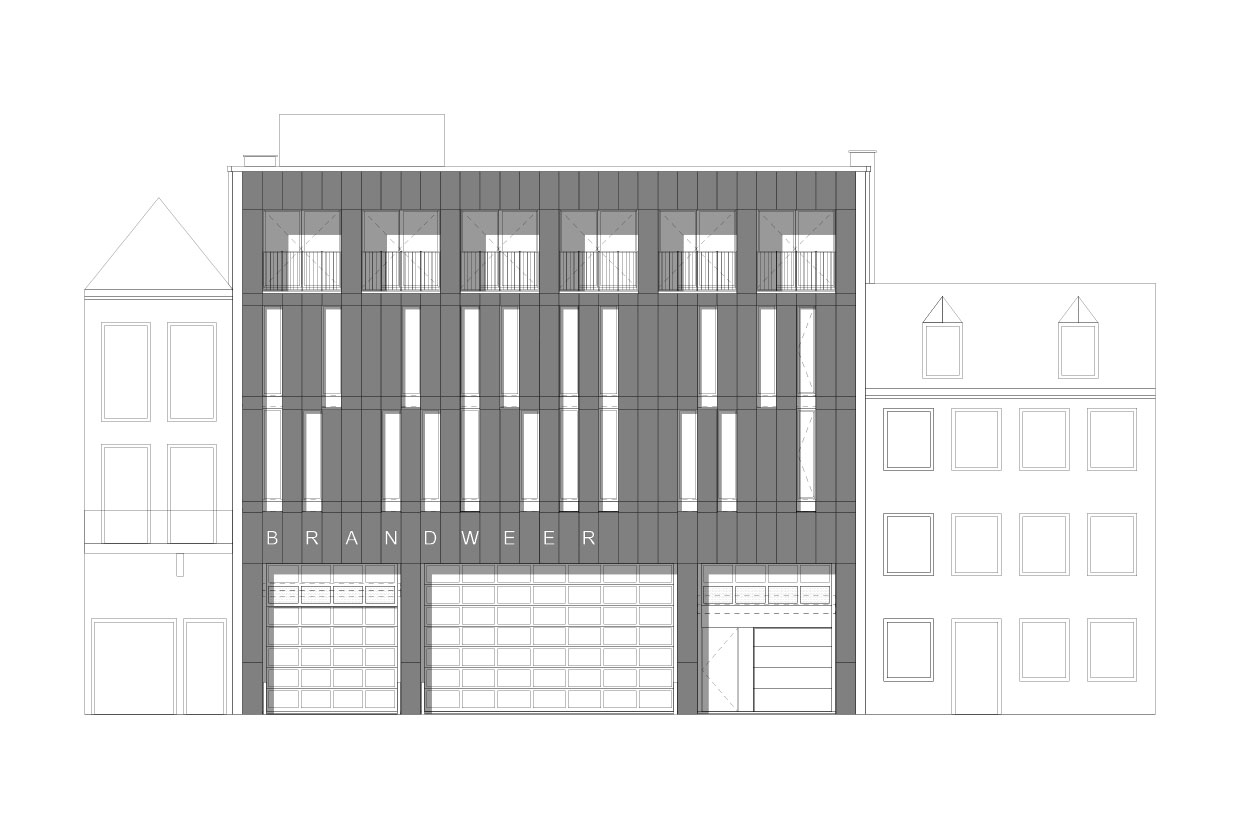 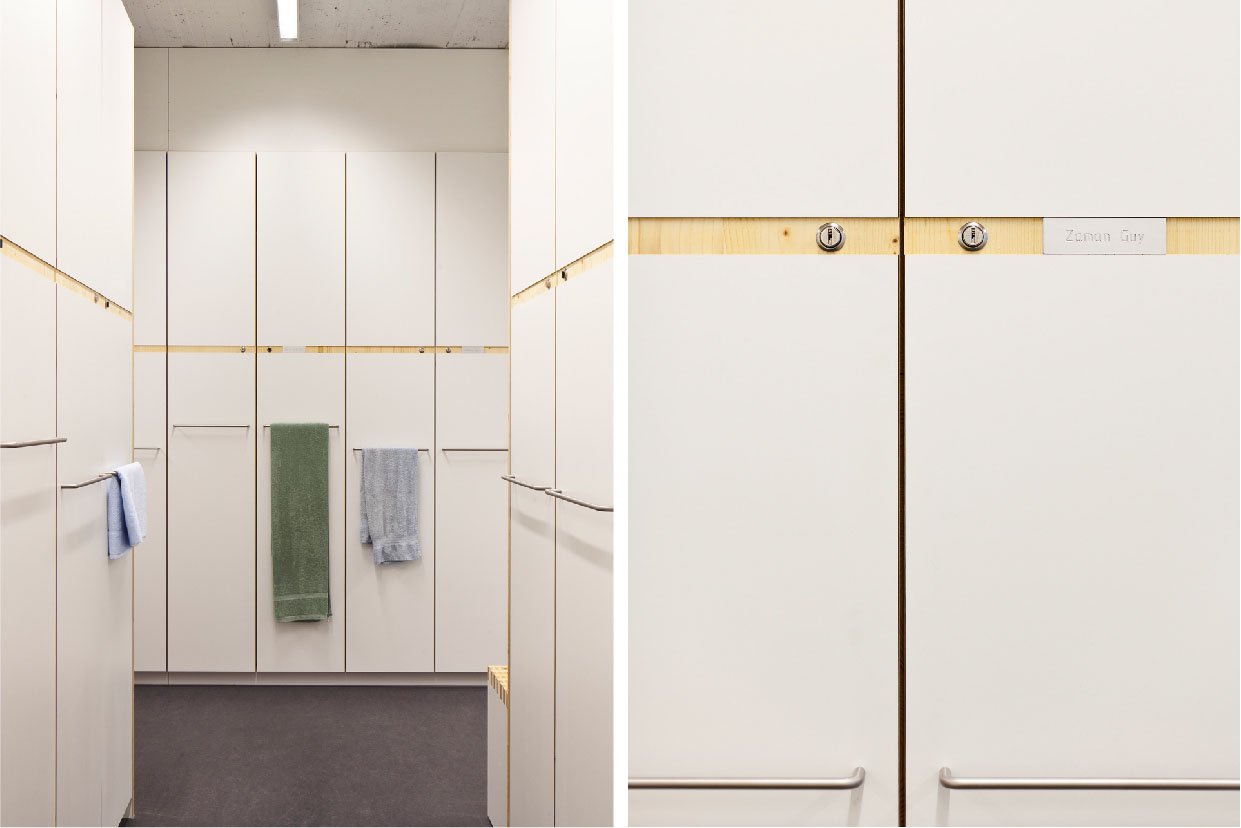 This project comprises the inner-city renovation of a 1950s office building into a fire station. The project site is located in Sint-Jacobsmarkt, inside the Boulevards and is therefore part of the old city centre inside the 16th century city walls. The multiple historical facades which form part of the surrounding streetscape testify to this.
The challenge was to find a way to integrate both the building volume and programme – both very divergent from the adjacent historic cityscape – with their surrounds. This is achieved largely through the arrangement of the programme, in coherence with the structure and façade expression. Given the desired functionality of the fire station, achieving an optimal organisation of the programme within the existing shell is literally a matter of life and death.

The fire trucks are parked on the ground floor, which is double the normal height, with all other spaces linked to it such as dispatching, change rooms and workshops for cleaning and repairing equipment. Thanks to the radical transformation of the existing structure, space was created for the vehicles while the façade was constructed in the form of a single, open door. The transparent skirting which flows from that door connect – by reverse logic – with the solid plinths of the adjacent buildings.

The existing structure is retained on the second and third floors. Service rooms are integrated within the relative small span such as locker rooms, sleeping quarters – in the form of robust alcoves – a spacious meeting room and the workout room. Due to the more intimate character of these spaces, a more closed façade concept was chosen. Its height matches the principle volumes of the adjacent buildings.

On the fourth floor, the building extends higher than the neighbouring buildings. This space houses the living area with commanding views of the city. The latter is complemented by a centrally located patio. The central organisation allows for the penetration of light from this patio deep inside the building. The street-side façade, is consequently rendered more open here due to rhythmically positioned and deep-set windows: as a reference to the classical oculi which decorate the roofs of the oldest buildings in Sint-Jacobsmarkt.